KCAT CAN: Haiyan tragedy brings out the best in humanity 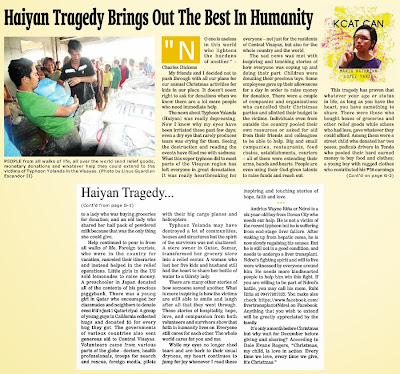 Haiyan tragedy brings out the best in humanity

“No one is useless in this world who lightens the burdens of another.” – Charles Dickens

My friends and I decided not to push through with all our plans for our annual Christmas activities for kids in our place. It doesn’t seem right to ask for donations when we know there are a lot more people who need immediate help.

The news about Typhoon Yolanda (Haiyan) was really depressing. Now I know why my eyes have been irritated these past few days; even a dry eye that rarely produces tears was crying for them. Seeing the destruction and reading the events have filled me with sadness. What this super typhoon did to most parts of the Visayan region has left everyone in great devastation. It was really heartbreaking for everyone – not just for the residents of Central Visayas, but also for the whole country and the world.

The sad news was met with inspiring and touching stories of how everyone was coping up and doing their part. Children were donating their precious toys. Some employees gave up their allowances for a day in order to raise money for donation. There were a couple of companies and organizations who cancelled their Christmas parties and allotted their budget to the victims. Individuals even from outside the country pooled their own resources or asked for aid from their friends and colleagues to be able to help. Big and small companies, restaurants, food chains, establishments, couriers – all of them were extending their arms, hands and hearts. People are even using their God-given talents to raise funds and reach out.

This tragedy has proven that whatever your age or status in life, as long as you have the heart, you have something to share. There were those who bought boxes of groceries and other relief goods while others who had less, gave whatever they could afford. Among them were a street child who donated her two pesos; pedicab drivers in Tondo who pooled their hard earned money to buy food and clothes; a young boy with ragged clothes who contributed his P30 earnings to a lady who was buying groceries for donation; and an old lady who shared her half pack of powdered milk because that was the only thing she could give.

Help continued to pour in from all walks of life. Foreign tourists, who were in the country for vacation, canceled their itineraries and instead helped in the relief operations. Little girls in the US sold lemonades to raise money. A preschooler in Japan donated all of the contents of his precious piggybank. There was a young girl in Qatar who encouraged her classmates and neighbors to donate even if it’s just 1 Qatari riyal. A group of young guys in California collected hugs and donated $5 for every hug they got. The governments of various countries also sent generous aid to Central Visayas. Volunteers came from various parts of the globe – doctors, health professionals, troops for search and rescue, foreign media, pilots with their big cargo planes and helicopters.

Typhoon Yolanda may have destroyed a lot of communities, houses and structures but the spirit of the survivors was not shattered. A store owner in Guian, Samar, transformed her grocery store into a relief center. A woman who lost her five kids and husband still had the heart to share her bottle of water to a thirsty lady.

There are many other stories of how someone saved another. What is more inspiring is how the victims are still able to smile and laugh after all that they went through. These stories of hospitality, hope, love, and compassion from both volunteers and survivors show that faith in humanity lives on. Everyone still cares for each other. The whole world cares for you and me.

While my eyes no longer shed tears and are back to their usual dryness, my heart continues to jump for joy whenever I read these inspiring and touching stories of hope, faith and love.

Andrius Wayne Riña or Ndrei is a six-year-old boy from Davao City who needs our help. He is not a victim of the recent typhoon but he is suffering from end-stage liver failure. After waking up from hepatic coma, he is now slowly regaining his senses. But he is still not in a good condition, and needs to undergo a liver transplant. Ndrei’s fighting spirit and will to live were witnessed by everyone around him. He needs more kindhearted people to help him win this fight. If you are willing to be part of Ndrei’s battle, you may call his mom, Rubi Riña at 09477987332. You make also check https://www.facebook.com/livertransplant4Ndrei on Facebook. Anything that you wish to extend will be greatly appreciated by the family.

It’s only a month before Christmas but why wait for December before giving and sharing? According to Dale Evans Rogers, “Christmas, my child, is love in action. Every time we love, every time we give, it’s Christmas.” 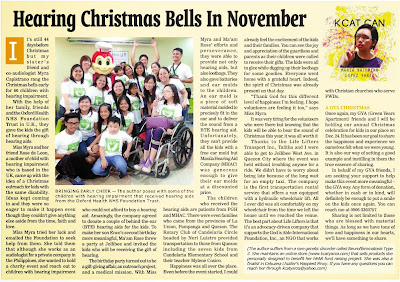 It’s still 44 days before Christmas but my sister’s friend and co-audiologist Myra Capistrano rang the Christmas bells early for 60 children with hearing impairment.

With the help of her family, friends and the Oxford Health NHS Foundation Trust in U.K., they gave the kids the gift of hearing through hearing aids.