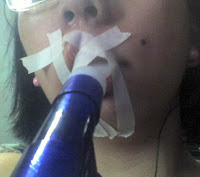 I have cough for a week now and I use the nebulizer 2-3 times a day to reduce the phlegm..

I need to inhale all the steam from the nebulizer and since my facial muscles aren't moving, I can't totally close my mouth.. So my mom had very brilliant idea.. Masking Tape!!!

Tita Yam is my constant chatmate in YM.. We chat almost everyday about anything under the sun and moon.. Actually, she's my godmother too..

I was chatting with her before and after Kariz' surprise debut party last March.. Michelle's debut, Kathreen's debut & Camille's debut.. Those surprise debut the GYA Peeps are doing for our friends.. She shared her memory of her 18th birthday as well.. It's not a nice memorable one.. Unforgettable yet disappointing because her 18th birthday was a less-than-ordinary day.. She said, she felt kinda envious to those who had their debut party.. During that kinda-dramatic chat, I was thinking that if only I could.. Right then and there, I had a very brilliant and funny idea.. I'll make her a video and pretend it's her 18th birthday on her 46th birthday.. 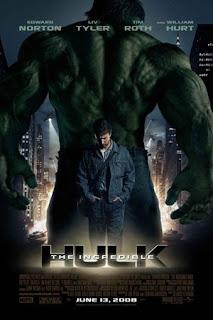 Talitha, Maro & me went to Greenhills Promenade last Saturday to watch The Incredible Hulk.. I didn't heard it.. Not totally though.. I heard feedback sounds ever.. But, but, but, I also heard real sounds.. As in REAL kinda-CLEAR SOUND! It's non other than the sound effects from the fighting scenes which is a lot.. And I love every sound of it.. There is a scene where the sound from the gamma is quite loud and annoying (?) according to Talitha.. But I enjoyed that sound.. Haha. Plus! Plus! Plus! I love Liv Tyler's lips na.. Because I understand most of her dialogue.. I could read her lips.. Galing!

Be Greatful for your life, Help Yuki

I've been blog hopping ever, and I read ella's latest blog entry on how we could be an angel to somebody.. So I clicked the link and read Yuki's story.. Hayy.. I really really feel for these sick kids, that's why I started MAY Birthday Project.. I feel more grateful for my life yet seeing them really saddens me.. I want them to get better and enjoy life like I'm enjoying it.. I may be sick, but that doesn't hinder me from loving my life..

I was blog hopping and dropping entrecards when I landed to virtual_reality's blog (who happened to land on my blog as well and left a message on my cbox) & read her recent post..

Things you need to know about
NEUROFIBROMATOSIS TYPE 2
http://www.genetics.com.au/factsheet/fs52.html

I received a text message from my nff (new found friend) Kat Soriano a while ago:

Let's pray for her friend's mom kahit na we don't know them..

I was out of town last week.. Joke! Away from our home sweet(?) home lang.. Out of Mandaluyong.. Hehe. My family stayed at Manila Pavilion from June 8 to June 13.. It's complimentary for my dad since he's part of the DPWH physical arrangement ek-ek.. Taga-glue ng props.. Hehe. Basta may free room period. Syempre we tagged along with him.. Damay-damay lang.. I missed my pc a lot! But I survived.. I have a good book to read, I'm in a nice room & I always eat sumptuous meals.. Hehe. Swimming pool pa pala! Of course I swam again..

What's Inside my bag? 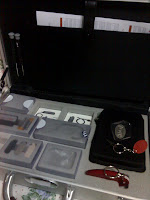 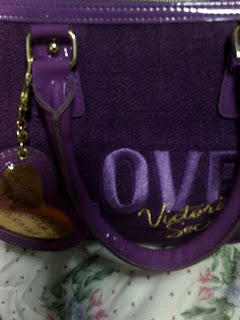 CHECK OUT GIRLFORALLSTATUS' BLOG
I joined her Bag Project last May
Check it out!

I'll take a break muna from blogging, blog hopping and dropping of entrecards.. Hiatus ba.. Uso eh..
THIS IS THE REASON
Eh I don't blog naman talaga regularly.. Wala lang.. Papansin lang.. You could visit me there if you like.. Wala naman akong ibang gagain kundi lumamon, read a book, watch dvd and swim!!! yey!

SMILE
it makes a world of difference

DANCE
who knows when you won't be able to

CRY
holding those emotions in is bad for you

KISS
kisses are the most wonderful thing in the world

FROWN
why not let him/her know you're unhappy?

PRAY
and ask for guidance

LIVE
because life is beautiful

Yahoo! I already got the NF2 wristbands i ordered.. My mom got the package from Mandaluyong Post Office this morning.. Thanks Ms. Lanita McGee of NF2 Crew..

Last Friday & Saturday of May & First Sunday of June

I've been busy and was out of the house these past three days and aylabit! :P

It was the 2nd tuning (mapping) of my CI last Friday (May 30).. I was told by Ms. Kate to observe the sound I'm hearing and be back on Thursday for my 3rd mapping.. I still can't hear speech but I could hear real soft sound in closed spaces already.. Yey! I'll be able to hear you real soon!